In the heart of the Indian Ocean, Madagascar, the fifth largest island in the world, has about 27 million inhabitants. Vast majority is living in rural areas in conditions of extreme poverty. Despite its natural resources, the country is one of the least developed in the world. It ranks 164th (out of 189 countries) in the UNDP Human Development Index 2020. 70.7% of the population lives below the national poverty line and access to clean water is a major challenge. In 2017, only 54% of households (36% in rural areas) had access to safe water sources, and only 11% (6% in rural areas) used basic sanitation facilities. The rate of access to electricity is estimated at only 13%.

Madagascar is one of the countries which is most vulnerable to climatic hazards and natural disasters. It is regularly hit by cyclones and suffers from recurrent droughts and floods which make the population increasingly vulnerable, particularly in the extreme south of the island where the situation is alarming. Three consecutive years of drought have plunged more than a million people into severe food insecurity, forcing countless families to leave the region.

Madagascar has not been spared from the Covid-19 pandemic and its associated crises, as it has been hit by repeated outbreaks. Months of confinement and restrictions have worsened the living conditions of the most precarious, especially in urban areas. The impact is considerable and affects all sectors (economy, health, social, etc.). The prices of basic products have risen dramatically and with the closure of schools, countless children have been deprived of their only meal of the day.

Madagascar ratified the Convention on the Rights of the Child on 19 March 1991.

Madagascar is a young country, with almost half of the population under 18 years old and 23% aged 10-19. Although the mortality rate for children under five has decreased significantly (from 107 per 1,000 births in 2000 to 54 in 2018), their health situation remains worrying, particularly their nutritional status: 49% are stunted or suffer from chronic malnutrition.

The health, protection and education of children remain a huge challenge. Many are forced to work to support their families, with an estimated one-third of those forced to engage in hazardous work.

Education is in crisis and while there is a severe lack of classrooms, disparities in access to education are also significant. Although the number of children enrolled in school has increased over the past decade, hundreds of thousands of children and adolescents are not in school. The gross enrolment rate at secondary level is very low (34.6% in 2019). 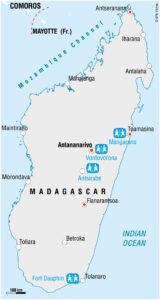 Present in the country since 1989, SOS Children’s Villages Madagascar supports around 6,500 children, adolescents and adults in about fifteen localities with alternative care programmes (for 770 children and adolescents) including 4 SOS Children’s Villages (Antananarivo, Toamasina, Antsirabe and Fort Dauphin), education and vocational training programmes (for more than 2,000 pupils), health programmes (more than 20,000 services per year in medical centres) and family strengthening programmes (for 650 families). In addition, thousands of young people and adults receive one-off services related to their rights.

From July 2020 to July 2021, an ecovillage pilot project has been set up in the SOS Children’s Village of Vontovorona with the support of SOS Villages d’Enfants Monde. In Vontovorona, power cuts can last several days in a row. As Madagascar enjoys around 300 days of sunshine per year, solar panels were installed on the roofs of 7 houses in this SOS Village, which now has its own source of electricity.

Currently, an emergency response project is being implemented in the Grand Sud region to help people who suffer from starvation.