A landlocked country in Central Asia, independent since 1991, Uzbekistan suffered a major economic and social crisis in the post-Soviet years. For the past five years, the country has been undergoing a process of political and economic liberalisation with reforms.

The second largest economy in the region, the country has been experiencing growth for the past twenty years, but not for everyone. Poverty and social inequalities make children and families particularly vulnerable. Major problems affect a large part of the population, especially in Khorezm, a region located in the northwest of the country, some 1,000 km from Tashkent, the capital. The region, also affected by desertification, has suffered environmental disasters (drying up of the Aral Sea) with serious health consequences and profound socio-economic repercussions. It is also one of the five regions where the rate of children without parental care is higher than the national average.

In 2020, Uzbekistan and the Khorezm region did not escape the Covid-19 pandemic, but were relatively spared. The country is one of the few to have managed to maintain a positive growth rate despite the pandemic having stopped the arrival of foreign investors. However, containment and restrictions have led to other crises affecting the lives of families and the well-being of children, who are more exposed to protection risks.

The socio-economic situation remains difficult. According to the Ministry of Employment and Labour Relations, the percentage of the population unemployed increased by 17% in 2020. This lack of employment opportunities for parents, combined with low incomes, difficulties in accessing housing and domestic violence, contributes to weakening the family fabric and exposes more children to the risk of losing parental care.

Uzbekistan ratified the Convention on the Rights of the Child on 29 June 1994.

With a population of 34.2 million, Uzbekistan has a young population of which 16% are adolescents. Recent social and economic changes have affected the lives of young people. Many who used to live in the countryside have migrated to the city to survive or earn money to support their families. Many have dropped out of school and find themselves unemployed, on their own, sometimes on the streets.

For a long time, many drop out of school and are forced to work in the cotton fields. Since 2016, in view of the progress made by the government in the field of human rights, the ILO has recognised the end of forced child labour.

In the Khorezm region, some 60,000 children under the age of 18 are considered socially vulnerable. 4% are placed in orphanages, boarding schools or state-run crisis centres. 22% live with a single parent, 0.6% with distant relatives or in family-type homes. Almost 73% are in a situation where they are at risk of being separated from their families due to poverty or other reasons. They need protection that their guardians cannot provide.

Recently, Uzbekistan has been addressing the issue of de-institutionalisation and reducing the placement of children without parental care, especially those with disabilities, in institutions. 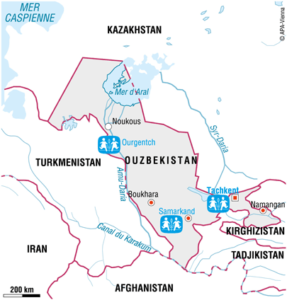 SOS Children’s Villages Uzbekistan has been present in the country since 1996 and in the Khorezm region since 2010. It has developed a holistic approach to provide alternative care via SOS families integrated into the community and actions to prevent family separation and support young people. Over the years, it has been able to offer innovative pilot models.

In November 2020, the association obtained the status of strategic partner of the State in the implementation of its 2019-2023 reform in favour of deinstitutionalisation. This leads to the implementation of the SOS models in the social welfare system and the guarantee of the sustainability of its programmes.

The association runs 3 SOS Children’s Villages (alternative care for children by “SOS mothers” in houses/apartments located in the community), 2 SOS Youth Homes and 2 SOS Social Centres which serve as the basis for running family strengthening programmes. More than 1,000 young people and adults benefit in Tashkent, Samarkand and the Khorezm region (in Urgench, the provincial capital, and in three rural districts, Shavat, Gurlen and Qushkupir).