Since independence, Senegal has been politically stable and considered as a model of democracy. The February 2019 elections saw the re-election of incumbent President Macky Sall. Although the country has been safe from terrorist violence throughout the region, its security is under threat.

A major economic hub in West Africa, the country is nevertheless falling back in the UNDP Human Development Index. In 2020, it was ranked 168th out of 189 countries (164th in 2018). Poverty remains high, especially in rural areas where many communities have no access to drinking water or sanitation and no medical assistance. Access to education is also difficult. About half of the children and adolescents grow up in families that live below the national poverty line (46.7%).

Exposed to climate change, Senegal faces natural disasters that result in chronic vulnerability. In September 2020, like many countries in West Africa, it was hit hard by torrential rains that caused major flooding in Dakar and several other towns. Hundreds of thousands of people lost everything and thousands of hectares of arable land were submerged.

In 2020, Senegal did not escape the Covid-19 pandemic and the multidimensional crisis (health, economic, social, educational) that followed the appearance of the virus and the implementation of strict restriction measures to stop its spread. The consequences are dramatic: a considerable drop in the growth rate, massive job losses, increased unemployment, etc. The crisis is plunging the most vulnerable populations into extreme precariousness. At the beginning of 2021, the country is facing an upsurge of the pandemic.

Senegal ratified the Convention on the Rights of the Child on 31 July 1990.

Between 2000 and 2015, Senegal made tangible progress in access to education. However, major challenges remain: regional disparities, quality of education, completion of studies, equality of access. Although girls’ school enrolment has improved, their drop-out rate is high because they are often forced to leave school to get married (29% of girls married by the age of 18) and/or to work, particularly in the domestic work sector.

Child labour still affects 23% of children. While in 2013 the authorities had put in place a national child protection strategy, three years later they decided to address the worrying situation of street children and talibé children forced to work or beg. The policy of removing children from the street has continued, even if the results remain mixed. 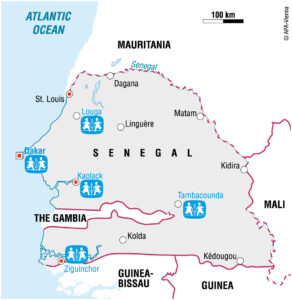 In addition, it deploys emergency aid in the face of natural disasters such as seasonal floods. In 2018, the association was the first charity to receive recognition from the Head of State, who awarded it his “Leadership and Good Governance” prize.