Russia is the world’s largest country with 17.1 million km² and a population of 146.7 million. Three quarters of the population live in urban areas where living conditions are better due to economic development, while the vast rural areas are still largely disadvantaged. Unequal distribution of wealth and great disparities are particularly noticeable.

After the fall of the Soviet Union, the country was strongly affected by political, social and economic changes. The major transformations of the last thirty years have left countless families on the margins of development, primarily affecting mothers and children. Before the Covid-19 pandemic, almost 15% of the population was already living below the poverty line, and Russia is now paying a heavy price for the pandemic and its related crises. The economic situation in Russia has become more fragile, poverty has increased and it is one of the countries in the world where the epidemic has claimed the most lives.

Located in the north-west of the country, about 160 kilometres from St Petersburg and about 20 kilometres from Estonia, the Pskov region – where the SOS Family Support Centre has been based since 2014 – has not been too badly affected by the pandemic. However, since 2002, the region has lost about 11% of its population, as people leave to find work in the big cities or abroad. Living conditions have worsened due to the deterioration of the socio-economic fabric, with many young mothers marginalised and a growing number of children without parental care. In 2020, due to the crisis, precarious families have had to face more and more problems: loss of employment, problems with distant schooling, psychological problems, domestic violence, etc.

The Russian Federation ratified the Convention on the Rights of the Child on 16 August 1990.

80% of orphans are said to be “social orphans”, i.e. children whose biological parents have been deprived of their parental rights or have withdrawn from them. These children are placed by the social services but many are left to fend for themselves.

Over the decades, the number of children living on the streets has also increased considerably. Victims of all kinds of violence, particularly sexual exploitation in the big cities, often falling into a vicious circle of addiction, they are excluded from society and deprived of their fundamental rights.

Since the 2010s, there have been significant changes in the way the state cares for children without parental care. They are no longer placed in institutions but live in a family environment, notably in foster families. SOS Children’s Villages has adapted its work accordingly to support more children in foster families. 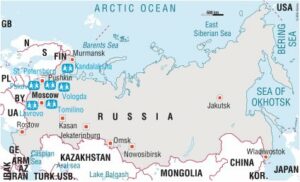 SOS Children’s Villages has been active in Russia since the late 1980s. More than 6,000 children, young people and adults are currently supported by SOS Children’s Villages Russia in Moscow and its region, in St. Petersburg and its region, as well as in the regions of Pskov, Vologda, Murmansk, Orel and in the city of Kazan in the Republic of Tatarstan. The association works in the field of social action, provides alternative care for abandoned or orphaned children and strengthens socially vulnerable families to prevent children from being abandoned. In Pskov, the SOS Family Support Centre project is part of the family strengthening programme launched in 2008 by SOS Children’s Villages Russia to provide support to migrant families and those in difficult situations.

Funding of the SOS Family Support Centre in Pskov