Niger is a landlocked Sahelian country facing chronic humanitarian crisis due to limited natural resources, inadequate basic social services, one of the highest population growth rates in the world and the effects of climate change.

These phenomena are aggravated by growing insecurity on the borders with Burkina Faso, Mali, Nigeria and in the Lake Chad Basin, as well as by increasing jihadist attacks in the country. As a result, forced displacement is increasing (230,000 Malian and Nigerian refugees, nearly 300,000 internally displaced persons) and insecurity is exacerbating community conflicts. Education is seriously threatened by the persistence of violence.

Due to its geographical position, Niger is a transit point for migratory flows. It is a country of origin, transit and destination for thousands of migrants. Politically, for the first time, Niger is experiencing a democratic changeover (second round of presidential elections scheduled for 21/02/2021).

Despite progress (life expectancy, primary school enrolment, better access to water), Niger remains in last place (189/189 countries) in the UNDP Human Development Index (2020). For many years, it has been confronted with food insecurity. Extreme poverty also hampers its ability to cope with droughts and floods and recurrent epidemics. In September 2020, like other neighbouring countries, it suffered torrential rains that caused the River Niger to rise and severe flooding, particularly in Niamey. The human toll was high and an estimated 630,000 people were displaced (OCHA).

In 2020, Niger did not escape the Covid-19 pandemic and the numerous crises it triggered. The economy, health and education have been seriously affected. The living conditions of the most vulnerable populations are deteriorating. At the beginning of 2021, like other countries in the region, it was confronted with an upsurge in the pandemic.

Today, more than 3.8 million people, including 2 million children, are in need of humanitarian assistance.

Niger ratified the Convention on the Rights of the Child on 30 September 1990.

With a population of 24 million, Niger is a young country, with children representing more than half of the population (10-19 year olds, 24%). Although under-five mortality has decreased significantly (from 226 per 1,000 births in 2000 to 84 in 2018), their health situation remains worrying, particularly their nutritional status (41% are stunted). 10% of children suffer from acute malnutrition.

The great precariousness of families forces many children to work (34% of them) and to resort to high-risk activities or prostitution in order to survive. Thousands work in uranium, tin and coal mines, others in quarries. Finally, many are forced to beg by Koranic masters (marabouts).

For years, education has been a priority for the Niger government. Despite progress (in less than ten years, the number of children enrolled in primary school has increased by 35%), the challenges remain enormous, if only in terms of equality of access (children living in urban/rural areas; boys/girls) or quality of education. 50% of 7 to 16 year olds are not in school.

The dropout rate is very high (less than 60% of students enter secondary school, only 20% finish), especially among girls who often leave school to get married. The government adopted a decree at the end of 2017 to protect and strengthen their schooling. It has also committed to ending child marriage. Three out of four girls are married before the age of 18 and the birth rate among teenagers is very high: 186.5 births per 1,000 girls aged 15 to 19. 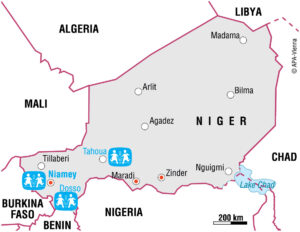 Created in 1989, SOS Children’s Villages Niger is present in Niamey, Tahoua, Dosso and Maradi where it manages alternative care programmes (3 children’s villages for 470 young people), education programmes (for 910 pupils), health programmes as well as 3 family strengthening programmes (for 260 families) and 2 PACOPE (for 500 families). Since 2005, it has managed several emergency aid programmes in Tahoua and since 2015 in Diffa (assistance project for child refugees from Nigeria and children from the community).