In 2020, Mali experienced a deteriorating security situation and a serious socio-economic and political crisis that culminated in a military coup on 18 August. President Ibrahim Boubakar Keïta, in power since 2013, was overthrown and the former colonel and Minister of Defence Bah N’Daw was appointed President of the transition.

Civilians are paying a very heavy price for the security crisis that has plagued the country since 2012. While the last few years have been marked by an escalation of violence, insecurity has worsened in the north and also in the centre of the country where clashes benefiting terrorists continue to pit armed groups against villagers from different communities. Large-scale movements of people fleeing to the south of the country continue. At the end of 2020, Mali had more than 311,000 internally displaced persons, 62% of whom were children. More than 1,230 schools have been closed, affecting some 370,000 students and 7,400 teachers (Unicef, 11/2020).

Such a context has a negative impact on the socio-economic development of the country, which is ranked 184th out of 189 countries in the UNDP Human Development Index 2020. 41.1% of the population lives below the national poverty line. Food insecurity and malnutrition affect all regions and only worsen with climatic events (droughts and floods). It is estimated that 3.8 million people are food insecure, with a nutritional emergency in the north of the country.

In 2020, the humanitarian situation deteriorated further due to the Covid-19 pandemic and its collateral crises. At the end of the year, there were 7.1 million people in Mali, half of whom were children, in need of humanitarian assistance.

Mali ratified the Convention on the Rights of the Child on 20 September 1990.

The country has one of the highest birth rates in the world, with a Malian woman giving birth to an average of 5.9 children. Malnutrition among young children has long been a concern: more than one in three children (under 4 years old) suffers from stunted growth.

Children and adolescents are still largely victims of traditional practices that harm their physical, mental and emotional development: female genital mutilation (73% of girls under 14), early marriages (18% of girls married at 15, 50% at 18), early pregnancies (174 births for every 1,000 adolescent girls aged 15 to 19), child labour (37%). (The State of the World’s Children, Unicef, 2019).

There are international reports of armed groups recruiting young boys to fight and young girls to be married to members of these groups. In addition, children are often not protected from violence nor the risks of human trafficking.

Discrimination against girls and women persists in many areas of the country and their educational and professional opportunities are generally very limited. 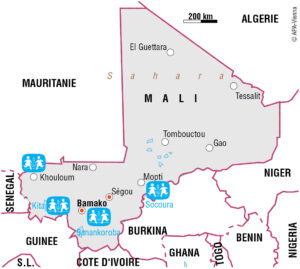 Active since 1987, SOS Children’s Villages Mali is present in Bamako, Sanankoroba, Socoura/Mopti, Douentza, Kita and Khouloum/Kayes, where it supports around 9,000 beneficiaries. Its programmes focus on family care (4 children’s villages and support units for 670 young people), education (4 kindergartens and 4 schools for 3,800 pupils), reintegration of talibé children, and youth employability. In addition, 2,300 young people and adults are involved in 3 family strengthening programmes and 1,500 children and 290 families in 2 PACOPEs in Bamako and Socoura. In 2020, specific measures in response to the Covid-19 crisis were implemented in these two PACOPEs in order to protect beneficiaries from the spread of the virus and help them overcome the economic, social and educational crisis.