Independent since 1958, Guinea has experienced a succession of authoritarian regimes, political instability and repression. In 2010, Alpha Condé became the first democratically elected President. Re-elected in 2015, he modified the Constitution in order to be able to stand for a third time, which triggered a large opposition and led to tensions and demonstrations. The latter are violently repressed, the toll is heavy: dozens of people killed and opponents arrested. In October 2020, Alpha Condé was re-elected but this re-election was contested and on 5 September 2021, he was overthrown by a military coup led by Lieutenant Colonel Mamady Doumbouya.

The new acute political crisis that Guinea is going through is added to strong social tensions in a difficult socio-economic context. Despite its natural and hydrographic resources (known as the “water tower of Africa”) and its under-exploited mining potential, Guinea ranks 178th out of 189 in the UNDP’s 2020 Human Development Index.

The economic and social crises of the late 2000s, the political instability until 2013 and then the Ebola epidemic (2014-2016) have had a lasting effect on the economy and living conditions of the Guinean population. 55.2% of the population live below the national poverty line and there are major disparities between urban centres and rural areas. Access to drinking water, sanitation and medical care remains a challenge. Extreme poverty primarily affects women and children and unemployment affects about 40% of young people.

In 2020, the situation was further aggravated by the outbreak of the Covid-19 pandemic and the crises it caused, and in early 2021, the country experienced a second Ebola epidemic.

Guinea ratified the Convention on the Rights of the Child on 13 July 1990.

With a population of 13 million, Guinea is a young country, with more than 60% of its population under the age of 25. Although infant mortality has decreased in recent years (from 166 out of 1,000 births in 2000 to 101 in 2018 for children under 5), a large number of children still die, either at birth (lack of medical assistance) or in infancy (polio, measles, malaria, yellow fever, etc.). Malnutrition remains a major problem. 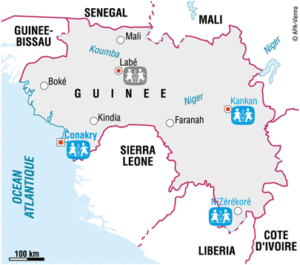 SOS Children’s Villages started its activities in Guinea in the 1980s when the country was strengthening its social policy for children. It intensified its activities as civil wars ravaged Sierra Leone and Liberia, and SOS Children’s Villages Guinea was committed to helping its neighbours. The association currently supports nearly 6,000 children, adolescents and adults in Conakry, Kankan, Labé and N’Zérékoré through its educational structures (for nearly 1,400 pupils), three alternative care programmes (for 414 children/adolescents) and four Programmes d’Accompagnement des Communautés pour la Protection de l’Enfant (PACOPE / 774 families and 3,137 young people who are direct beneficiaries, and thousands of other families from the community who are indirect beneficiaries).

Moreover, in 2021, SOS Villages d’Enfants Monde supported the establishment of two “Digital Villages” in Conakry and Kankan. These two SOS Villages have been equipped with computer equipment and trainings have been organised to enable children not only to learn and strengthen their use of computers, but also to have access to learning resources available online.